The day I cried

I’ve done a lot of walking over the past decade. I’ve been brought low by steep hills, felt my body crumple at the thought of climbing yet another stile, withered in the face of a wrong path, an impassable ditch, the need to turn back and retrace my steps. But generally I’ve found my feet have been good companions, rarely complaining. Until the third day.

Late is relative I suppose. I got to the Sunnyside Cafe just after 9am and the staff were still setting up. But they were happy to seat me and feed me and ask me interested questions about my ridiculous walk. When I perused the menu, I was kicked every so firmly in the face. 8.10 for a full breakfast. “Does it come with tea?” I asked. “No,” said the waitress, with a confident and don’t-fuck-with-the-menu way I have come to be familiar with. “But I can get you a cup.”

It was one of those dishes where the whole is substantially less than its parts. There were two rashers of excellent low-fat local bacon, two Lincolnshire sausages which are of the meaty rather than juicy variety, a generous slice of crumbly black pudding, one egg, half a cherry tomato and a pile of grilled mushrooms. And – I kid you not – ONE slice of toast cut in half. There was not a wet thing on the whole plate. It was almost inedible. I had to wash each dry mouthful down with a sip of tea, a considered sip of tea considering it was extra. Individually, each of those items was delicious. But there was nothing bringing the whole thing together. And let’s face it, a full breakfast is not full if it doesn’t have beans.

After breakfast (9.70 = 97 kuna, which in Zagreb is dinner and beers for two at a local pizza/pasta restaurant), I stuffed my disappointment deep inside in order to resurrect it later for this blog post and a TripAdvisor review. I was a bit concerned that the road I would be walking along would be busy, and although there was a bit of traffic, there was a small path and it was manageable. I did however see a badger, sadly departed from this life, perhaps not long before. I’ve now seen a total of two badgers in my life, both dead at the side of the road 🙁

Apart from cows and sheep and horses, my experience of wildlife on this trip has been fairly limited. I’ve noted several species of birds, all startled by my approach, which I have collectively named ‘startlings’. Some may be moor hens or pheasants, others seem to be a type of magpie. Other notable animals I’ve seen are 2 dead rats, one squashed into the road, and a dead mouse in a field – possibly a field mouse? I caught sight of one grey squirrel and, more rare, one red squirrel, and two enormous hares. But generally the wildlife has been human.

I didn’t have to stay long on the road, as there was a brief diversion onto a bridleway through a wood. Along this path I saw some very very cool mushrooms, bright orange with wide expansive lids, beneath which certainly lived fairy creatures. Thin spires of grass gathered around, gently brushing against them, providing warmth, perhaps, or tickles. Who knows what the fairy people like best?

After a few miles I entered the town of Tealby – and if I’d had more time I would have loved to stay longer. Tealby is the perfect little Lincolnshire village, with a church, school, houses with real people and a village hall and small shop. They even have a ye olde pub with a ye olde thatched roof. A few streams run through the town, and it has long been the home of various mills, of which only one now remains. Walking towards one of these streams, I had to give way to a contractor who was reversing back up the street. Across the street ran a stream, and the only way across was to ford it, something he couldn’t do in his ute. Fortunately, there was a small bridge for pedestrians. I was deliriously taking photos of the stream, and the bridge and the ford, when an elderly couple came out of the house right by and got into their car. I told them they lived in a beautiful village, like it was news to them, and they smiled politely as they continued to slowly fold up their bodies into their car. “Lived here your whole life?” I asked, desperate to keep the conversation going.

Off they drove, and I thought, that sounds like a lifetime to me.

It might be difficult to believe, but I’m a little unprepared for this trip. My regular hiking boots are shredded in the soles, and I was too cheap to buy another pair. So after some totes legitimate internetting, I found that trainers are heaps better than heavy old leather boots for walking. This appealed to me on many levels, and as it happened, C had an old pair of shoes she couldn’t wear anymore. Great, we both thought. Re-purposing old shoes! So I’ve been wearing trainers.

The pros and cons of this decision I will write about in another post. For now, let me just say that trainers are not a good choice for English field walking. Which is primarily what this walk has been. In short, my feet have been absolutely sopping for 3 days.

Shortly after Tealby, I started to regret my decision, but only peripherally. When you make a stupid decision, you tend to stick to it doggedly, and so I did.

Not long out of Tealby there was a field with an information board. Let’s face it, I can’t resist an information board at the best of times, but one apparently in the middle of nowhere, facing an empty field – well, I had to have a read. It turns out that the field wasn’t quite empty. The ugly shrubs in the middle were covering all that remained of the former estate of the Lord Tennyson family – Lord Tennyson as in the poet. It used to be a magnificent stately home and now is nothing but rubble, and not even that. In the field opposite, some large red cattle came closer to the fence to stare at me. The board informed me that these were Lincolnshire reds, brought over by Vikings. Vikings! Viking cows! The things you learn.

By this time my feet were quite sore. But under no circumstances was I going to stop. I had had a big breakfast and wasn’t hungry, and with not a small amount of horror I realised I still had at least 15 kilometres to go and it was after 2pm. It was trudge until the end at this point, and trudge I did.

It wasn’t all awful, however. I stopped for 10 minutes to watch a man in a tractor ploughing a field, turning the gold field black in neat progressive stripes. The field straddled a hill, and at each pass when he reached the crest a huge flock of birds would fly up, their white wings startling against the black field, crying out over their interrupted dinner. As the tractor trundled on down the field they settled again, eating up whatever it was they found in the turned over dirt, raucously calling out to each other like misbehaving dinner guests. The field was huge, and it took me some few minutes to walk its perimeter, so I saw the tractor go up and down, up and down, several times. The driver too must have watched me slowly progressing around the field – my pride stopped me from limping in public, so I tried to stride purposefully – and when our two paths finally met he gave me a very warm wave.

Buoyed by this, I carried on for another mile or two, pretending that my feet didn’t really hurt that much, and I was only 30 minutes TOPS from Goulceby. There’s something about the last 5 kilometres of a walk, where you feel like you’re only 30-60 minutes away from the end, really. This lasts for about 3 hours. I finally reached breaking point when I crossed a stile, and landing on the other side I felt a tremendous pain in my right pinky toe. “Oh noes,” I thought. “I think I’ve completely torn off the nail.”  My mental voice became slightly hysterical, and I cried a little.

I had no choice. I had to sit down and inspect my feet. I couldn’t put it off any longer.

The state when I took off my socks was bad, but not as bad as I thought. Four or five blisters on each foot. My right pinky toenail was intact, but a blister had evidently formed over the whole toe, and this had exploded in spectacular form. The pain came from the red raw skin which was exposed, and very sensitive. I pulled the old skin down over the toe, to give it some protection, and applied some magic paw paw juice (a red tube
found in every Australian’s arsenal of supplies). I did not scrimp on plasters. I covered my feet in them, hoping that a bit of padding would help those poor deformed blisters and toes. I wrung some water out of my socks, and then I pulled them back on, and pulled my trainers, which I hated at that moment with a cold mean hatred, I pulled my trainers back on an laced them up.

I still had 5kms to go. It was more than time to get back on the road.

The wonderful thing about walking is that the good and bad are all mixed in together, and you can cry from pain and cry with amazement all within a few minutes. Sitting on the path, trying to fix my feet, I had seen down in the valley what looked like a house. Of course, my first thoughts were selfish – I hope they don’t see me limping, or hurting. I want to appear strong and confident in the landscape (tool, I know).

As I limped (imperceptibly, I hope) down the hill, a fantastic church seemed to appear behind the house. There was nothing else around. Just this house and this church, in the middle of several fields. I thought to myself, this house has its own church! That’s a bit much.

I had to cross a small stream to get to the house and church and after I took a photo I looked at my OS map. “Mediaeval village of Biscathorpe (site of)”. Here had once been a village, just like there, so many kilometres ago, had once been a castle. And now, just fields. Room for sheep to wander and graze, and to later be killed and eaten – nothing left there, either.

I still had a long way to Goulceby, but I made it. I arrived at the campsite/pub with only 24 minutes until sunset. I had a long hot shower, plastered my feet up some more, and had enough beers to forget about the pain.

A ford at Tealby

Site of Mediaeval Village of Biscathorpe

Turning the field from gold to black 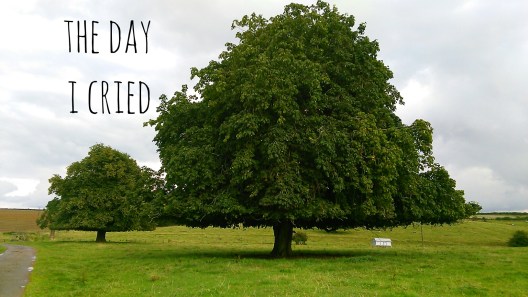