When you are an international toilet woman of mystery, you get sent a lot of interesting toilet related links. Here’s a few I received this week.

How much does your poo weigh? 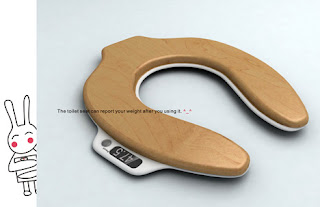 This device was actually designed to show people how much weight they ‘lose’ after going to the toilet but a secondary and, I think, more interesting function is that it can tell you how much you evacuated. Anyone who has a set of scales in their bathroom has probably already conducted this experiement – it’s very enlightening 🙂

I particularly like the look of consternation in the first panel.

A person, or gang of persons, obviously finds portaloo toilets so offensive that they have launched a major offensive against them, setting fire to 18 toilets in two months. A Google news search turns up nothing like this happenning before, which is a surprise. They do seem an easy target and are unlikely to cause extensive damage to anything around them. Fortunately, no one has been hurt. You can watch a video here.

The inauguration of President-elect Barack Obama is set to be the biggest “temporary restroom event in the history of the United States” with 5,000 toilets to line National Mall. While the toilets will be regularly serviced, I would advise anyone attending to bring their own toilet paper.

The portaloos are not without controversy. Big Dog claims that providing VIPs with flushing, posh portaloos is elitist and says that “the ones the VIPs use should be no better than the ones the visitors will use”. And John Banzhaf, Professor, is using the toilet coverage to promote ‘potty parity’ – women take longer to pee so dividing toilets exactly in half based on gender discriminates against women, forcing them to wait longer. (Potty parity was addressed in New York with the Restroom Equity Bill.)

Man shoots toilet… and self

Fortunately, or unfortunately, this man didn’t quite meet the criteria to make it into the Darwin Awards. After dropping his gun in a public toilet, he shot his arm and the toilet. I love the story for this sentence:

The fall triggered the gun to go off and the shocked man was glad he was already in the toilet. 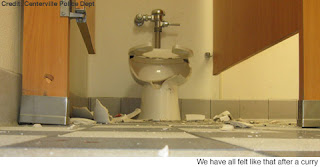 I’ll bet the toilet had it coming.