An auspicious day, according to the Chinese, and with the opening of the Olympics today, Beijing can be proud to boast that it has 5,333 public toilets and 8,000 toilet attendants.

Topping the list of most useful items in this week’s flush is The Woon Box, an all-in-one toilet, kitchen and shower. Sounds like my last apartment. Oh, those wacky Dutch. 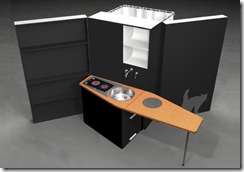 In England, a Morecambe man has been banned from every public toilet in the UK after an attempted sexual assault. Don’t be alarmed if he knocks on your door asking to use your loo; he is a man of previous good character.

The development of an iPhone application which locates toilets in Australia by using the National Toilet Map has been scuppered by government bureaucracy.

Okay, so this next story has a lot of problems for me. First of all, it involves Christian motorcyclists. Like, what? Secondly, the Christian motorcyclists are meeting at the Kum and Go. Okay, now in my country, that word just there, that K word, kum, that’s totally dirty. Usually it’s spelled with a ‘c’ but still, dirty. And thirdly, and why it’s making it onto The Bog Logger, is that these Christian motorcyclists are meeting at the Kum and Go (whatever that is – I’d rather not know) to go on a ‘toilet paper run’. They’re doing this for some organisation which doesn’t receive government funds or denominational support, nor, apparently, toilet paper. Oh, those wacky Christians. Read the full story here and let me know what it’s about. Cheers.

That’s all for me today. It’s almost time for the Opening Ceremony. 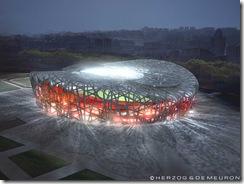 Birds nest? Looks more like a glowing toilet seat to me.