I hate, loathe and despise spaceship toilets, and Seattle residents apparently feel the same way. They’re getting rid of 5 of the expensive behemoths which have been in central city locations since 2004, but keeping the $2.59 tax which was introduced to pay for them.

The toilets, purchased from a German company, proved extremely unpopular with locals. The contract for the $6.6million toilets has been ended early after they became a magnet for drugs and prostitution. The self-cleaning machines, after a while, didn’t. Instead of saving money on cleaning the facilities the Council had to employ cleaners. At the initial consultation, the toilets were supposed to be a cost-effective solution, but at $360 per toilet per day they are anything but.

As well as being expensive, space inefficient drug dungeons, I personally find these toilets terrifying. When they installed one in Newcastle (Australia) I would piss next to it rather than go in (much to the amusement of the bouncers at the Crown and Anchor). What if it started ‘self-cleaning’ while you were in it? *shudder* Nope, a squat by the wall it was. Hey, I’m a classy girl.

The Council is now hoping to sell the unsuccessful toilets on eBay. I’ll post the link as soon as there is one. 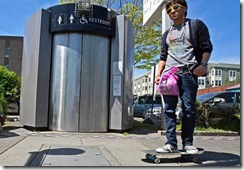